Celebrating 30 years of CASA in Virginia

Celebrating 30 years of CASA in Virginia 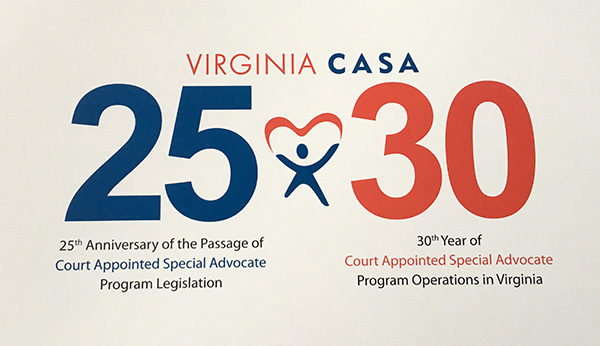 The CASA – or Court Appointed Special Advocate – Program just celebrated a big anniversary in Virginia: 30 years of giving children a voice in the court systems of our commonwealth.

Based on a national model through the National CASA Program, CASA began in Virginia in 1985, when three programs launched in Roanoke, Norfolk and Newport-News. SCAN added its Alexandria CASA Program to the list in 1989, and by 1990 there would be 10 total programs. Today, 27 programs operate across the commonwealth including others in our region like Fairfax CASA and CASA-CIS which serves children in Prince William, Fauquier, Loudoun and Rappahannock. Many have expanded since their beginnings, like SCAN’s program which – thanks to incredible support from funders and those in the local juvenile court system — grew to include Arlington in 2005.

Happy anniversary, Virgnia CASA! The best way we can think to celebrate is to recruit more volunteers and advocate for more children in the coming year.

Will you celebrate with us?