April 6, 2017 – SCAN of Northern Virginia announced the 2017 winners of its annual Allies in Prevention Awards, an annual honor given to community members for exceptional work protecting children and strengthening families in five regions of Northern Virginia. The awards were presented by SCAN and its Allies in Prevention Coalition at a luncheon to kick-off National Child Abuse Prevention Month. ABC7’s Scott Taylor emceed this year’s event, which included a keynote address by Dr. Christina Johns. Special guest Delegate Tag Greason presented the 2017 awards to: 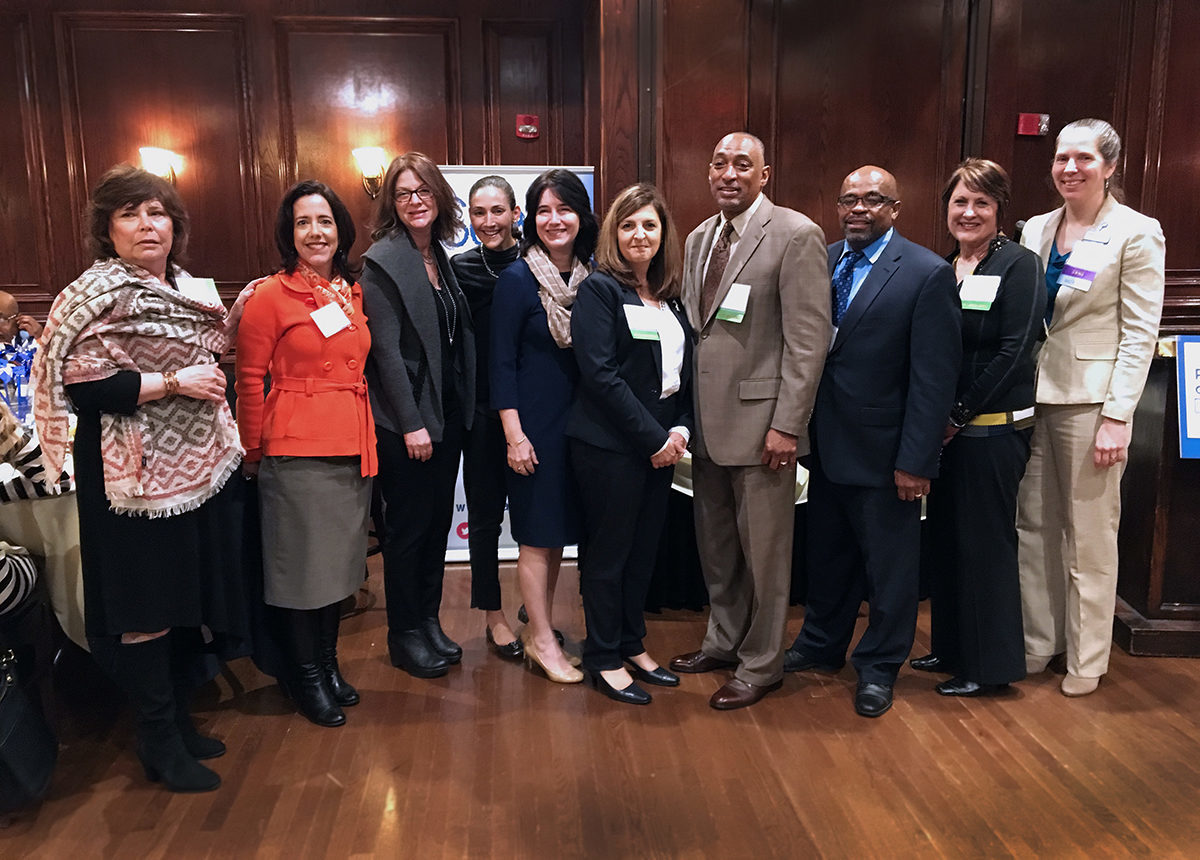 Children in Alexandria have looked to Teddy Jones and Chucky Moore as a constant source of guidance, strength and compassion for more than thirty years. Both honorees are counselors in Alexandria City Public Schools–Mr. Jones at Francis Hammond Middle School and Mr. Moore at TC Williams High School–as well as counselors at Charles Houston Recreation Center. Over three decades, they have established and supported life-changing programs such as the Peer Advisor Program; the Untouchables, a group mentoring program for young men; and Young Successful Stories, a mentoring program for minorities. Their focus on building relationships with children while also building up those children has resulted in both strong relationships with students and–ultimately–strong young citizens in the community.

Mr. Jones and Mr. Moore are able to reach youth where they are with safe, unconditional support, forming connections with students as well as their families. Parents trust them to be mentors for their children, but also look to them as role models for their own actions as adults. In fact, Mr. Jones’ and Mr. Moore’s work often leads to more positive, healthy communication between children and parents at home, a significant protective factor against child abuse and neglect.

Their nominator Noraine Buttar notes that many former students are now raising their own children and are thrilled for them to experience some of the same programs with Mr. Jones and Mr. Moore: “The fact that generations of the same families have passed through their programs and seen positive life outcomes gives testament to the work they did–and continue to do–to prevent child abuse.”

Marcella Rustioni is the primary forensic interviewer for Arlington’s Children’s Advocacy Center, orCAC. In this critical role speaking to children after accusations of abuse and neglect, her work is the foundation for the investigations, prosecutions and protections that may follow. It’s also quite often the first step in healing for children and families involved in the trauma. Ms. Rustioni approaches this intense responsibility with both respect for the process and a deep care for the children she interviews. Before coming to the CAC, Ms. Rustioni was a CPS worker in North Carolina, and more recently trained as a forensic interviewer with Safe Shores, the CAC in Washington, DC.

“Our CAC team has been amazed every day for the last 12 years as we observe parents and children relax and share their painful stories for the record,” notes Rustioni’s nominator Laura Ragins, Clinical Supervisor for Arlington County Child and Family Services Division and Director of the Arlington CAC.

In addition to her direct work with victims, Ms. Rustioni devotes significant time to educating others as a faculty member and instructor for the ChildFirst Forensic Interview Training Program and as a trainer for Darkness to Light’s child sexual abuse prevention curriculum. She has written most of the Arlington CAC’s policies and protocols, enabling it to pass the National Children’s Alliance accreditation process twice to date.

“She has touched the lives of thousands of children in a profound way,” notes Ragins, “and she is extraordinarily committed to the awesome responsibility of giving these young victims a voice.”

Rustioni was not present to accept her award, but her supervisor accepted it on her behalf at an awards luncheon this month.

Nannette Bowler is the Director of the Fairfax County Department of Family Services and sits on the Board of Directors for Fairfax CASA (Court Appointed Special Advocates). Since coming to Fairfax County in 2008, she has led with a powerful vision that focuses on the greater community while empowering staff to recognize and engage strengths in the individual families they serve.

Ms. Bowler has worked to create an exceptional team within the Department, with members who are approachable and willing to collaborate. “There is no ‘us against them’ mentality,” notes her nominator Darcy Cunningham, Executive Director of Fairfax CASA. “Nannette embraces collaboration.” She has been pivotal in creating progressive and innovative programs within DFS including leadership academies, training new workers in cohorts, Neighborhood Networks, and the Father Engagement Program.

Before coming to Fairfax County in 2008, Bowler was chief judge of the Family Division for the 8th Judicial Circuit in Ionia County, Michigan. As head of the Michigan Family Independence Agency and a member of the governor’s Cabinet, Bowler directed 22 programs, including child welfare, juvenile delinquency, adult protective services, self-sufficiency, and disabilities. She previously served as executive director of the Chance at Childhood: Law and Social Work Initiative at Michigan State University, and was also co-founder and executive director of the Children’s Law Center and legal counsel/executive director to the Michigan lieutenant governor’s Commission on Children, which culminated in the passage of 21 bills in the house and senate involving all aspects of child welfare.

In 2008, a group of concerned citizens in Loudoun County started 100WomenStrong in an effort to leverage their combined philanthropic resources to serve their most vulnerable neighbors. By 2009, the group was making its first grants to local nonprofits.

Since then, this relatively small group of women – now 30 members – has invested more than one million dollars in their community. Much of that investment has made a significant impact on child abuse prevention initiatives and programs that help to build and promote resilience in families at-risk for child abuse, health issues and homelessness.

“100WomenStrong has made a unique difference by truly understanding the importance of investing in quality services that help families build protective factors,” notes Nicole Acosta from the Loudoun Abused Women’s Shelter, who nominated the group. “That is what will ultimately prevent child abuse in our community.”

The organization’s goal is to reach 100 members in the near future, making it the premier philanthropic group for giving within the County. Even now, the depth and breadth of 100WomenStrong’s impact in Loudoun is clearly demonstrated by the list of programs and projects they have supported, touching the lives of hundreds if not thousands of children and families in our community every year.

Of special note are the efforts of Karen Schaufeld, notes the nominator. One of the original founders and current Chair of the organization, Karen’s vision, leadership and compassion for her Loudoun neighbors in need has been instrumental in empowering dozens of other members to embrace a renewed generosity and shared vision to impact their community.

Betsy Young is the Supervisor of School Social Workers for Prince William County Schools. In 2010 she brought twenty years of experience as a substance abuse counselor, mental health therapist and social worker to lead the large group of social workers who serve the more than 90,000 students in a fast-changing, increasingly diverse school district.

“Betsy takes on new challenges with a vengeance,”notes her nominator, Jo Anne Renton with the Child Protection Partnership. “She sees roadblocks as opportunities to find new routes to solutions.”

One of those challenges presented itself in 2012, when Sex Trafficking was becoming a more urgent issue in Prince William County. In a time of tight budgets and limited staff resources, she pursued a grant to address the issue of Sex Trafficking, making PWCS the first school district in the Commonwealth of Virginia to provide a comprehensive human trafficking prevention program.

Ms. Young’s gift for identifying key partners and developing partnerships that work soon became essential. When she knew the schools couldn’t effectively run the project alone, she enrolled law enforcement and social service agencies–both public and private–to participate. Since the program began in 2013, PWCS has identified 162 students who are on the continuum of exploitation and over 440 students have requested assistance or follow-up with a Social Worker. Victims are receiving services through community partners, enabling them to continue their education.

“I don’t know what project Betsy will think of next,” notes Renton. “But I do know that the teens in Prince William County are safer and healthier because she has chosen to work in our community.”