SCANStop: Painting a picture, one stroke at a time

SCANStop: Painting a picture, one stroke at a time 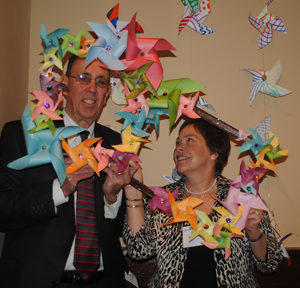 Judge Stephen Rideout and his wife, Bobbie, have fun in the Pinwheel Photo Booth after he gave the Keynote Address at SCAN's 10th Annual Allies in Prevention Awards Luncheon.

“Each of you has an idea of how to prevent child abuse and improve outcomes for families.”

Judge Stephen Rideout, formerly Alexandria’s Chief Judge for the Juvenile and Domestic Relations District Court, was addressing the Allies in Prevention at their recent Awards Luncheon.  We had come to honor  five individuals who worked in extraordinary ways to prevent child abuse and promote nurturing families.  And we had come to hear Judge Rideout .

Judge Rideout’s life and words inspire.  As a judge he introduced the family-focused drug court, streamlined the juvenile court docket, and led state task forces on juvenile delinquency and gangs.  Yet the judge insisted that he often relied on suggestions from CASAs (Court Appointed Special Advocates), concerned individuals, and special agencies.  He challenged child advocates and professionals to look for small steps, or “little pictures”,  that will improve their own practices, since the big picture can be overwhelming.

Judge Rideout takes that message on the road.  Although retired, he travels widely to consult on child welfare and juvenile justice issues.  He also volunteers as a CASA in Dorchester County, Md.

Child welfare professionals listening to the keynote address felt validated and inspired to seek new ways to protect children and enhance their lives. But I wondered about our other guests—business leaders and friends who are appalled by child abuse but who don’t deal with the problem on a daily basis.

When Judge Rideout finished speaking, a banker turned to me and said, “Tell me more about the CASA program.”  Based on my own experience, I explained CASA’s formal role in monitoring cases as well as the more informal chance to befriend a child and help him get through a tough period.  The banker and his colleagues listened attentively and peppered me with questions.  You could see that they were impressed by CASA—and by the fact that Judge Rideout became a CASA volunteer following his distinguished career.

Thanks, Judge Rideout, for giving me a chance to paint a little picture, perhaps gaining support for a worthwhile program.

Maybe my new friends will add a few strokes as well.