April 6, 2018 — SCAN celebrated the winners of its 2018 Ally in Prevention Awards at a luncheon today with help from NBC4’s Leon Harris, a SCAN Honorary Board Member, and Keynote Speaker Carine McCandless, New York Times bestselling author of the book, The Wild Truth.

The five honorees this year include:

Arlington | Cheryl Fuentes, Arlington County
Read more about Cheryl’s award in the Arlington Sun-Gazette online at InsideNova.com and at ARLnow.com

SCAN also launched Year 2 of the 2018 Northern Virginia Child Abuse Prevention Campaign, Parenting Can Be Tough, at the awards luncheon.

It’s Here! Year 2 of SCAN’s “Parenting Can Be Tough” Campaign

To kick off Child Abuse Prevention Month, SCAN is launching the second year of its 4-year Parenting Can Be Tough public education campaign in Northern Virginia. Year 1 focused on resources for parents of infants; Year 2 focuses on parents of toddlers. But many resources — including things like parent support cards and various fact sheets — are tools that can help all parents. (Year 3 and 4 will focus on school-aged children and teenagers.)

We encourage all community members to explore the newest resources, including: 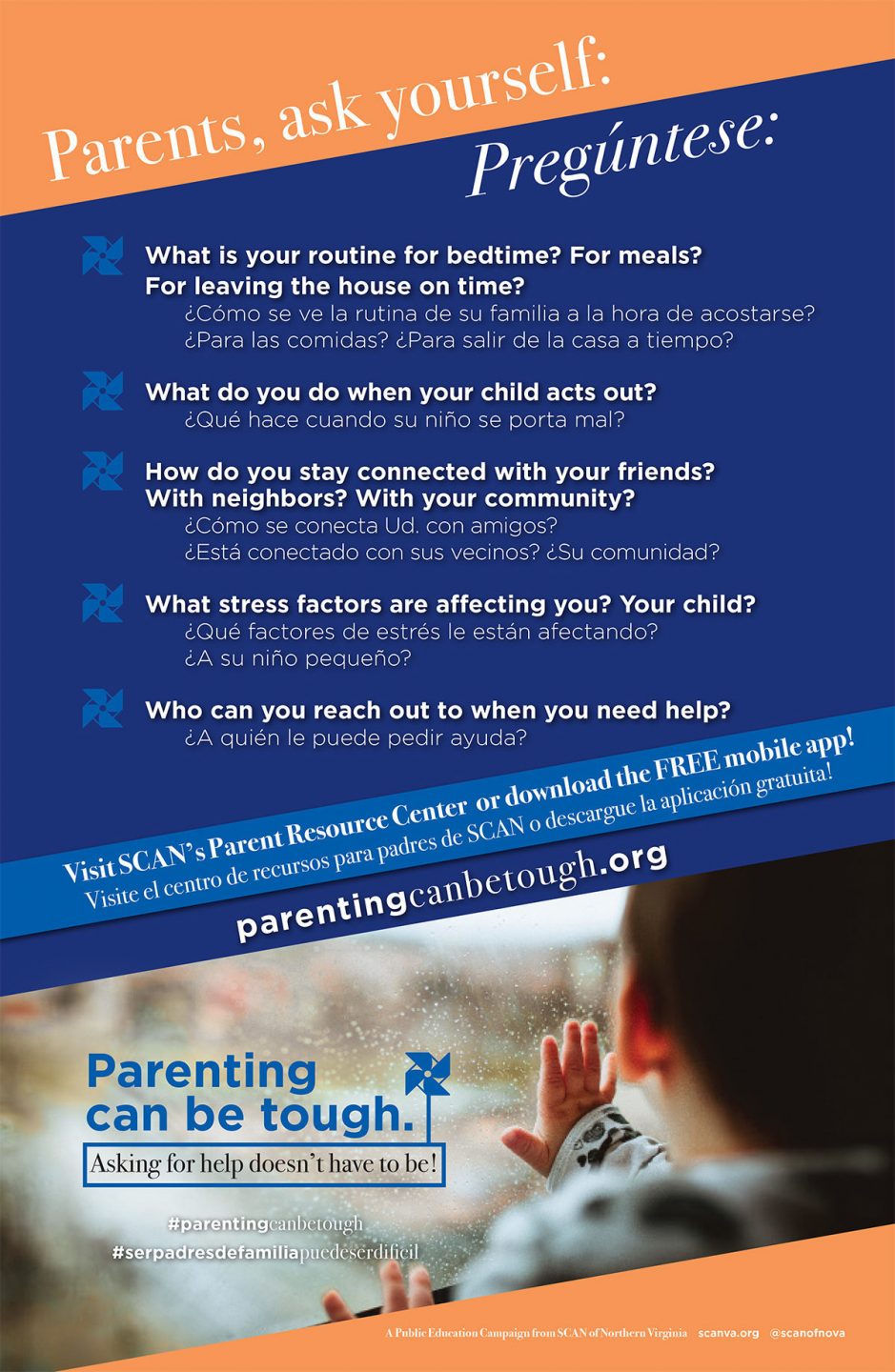 The campaign encourages parents to understand it is okay to ask for help and get support. (In fact, it makes for stronger families!) Suggestions include: 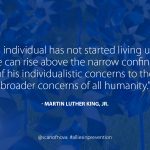 “An individual has not started living until he can rise above the narrow confines of his individualistic concerns to the broader concerns of all humanity.” – Martin Luther King, Jr.

This will be the 15th year we celebrate the heroes who work passionately for the children, families and communities of Northern Virginia. Who will we honor this April (during National Child Abuse Prevention Month) with a 2017 Ally in Prevention Award? That’s up to you! 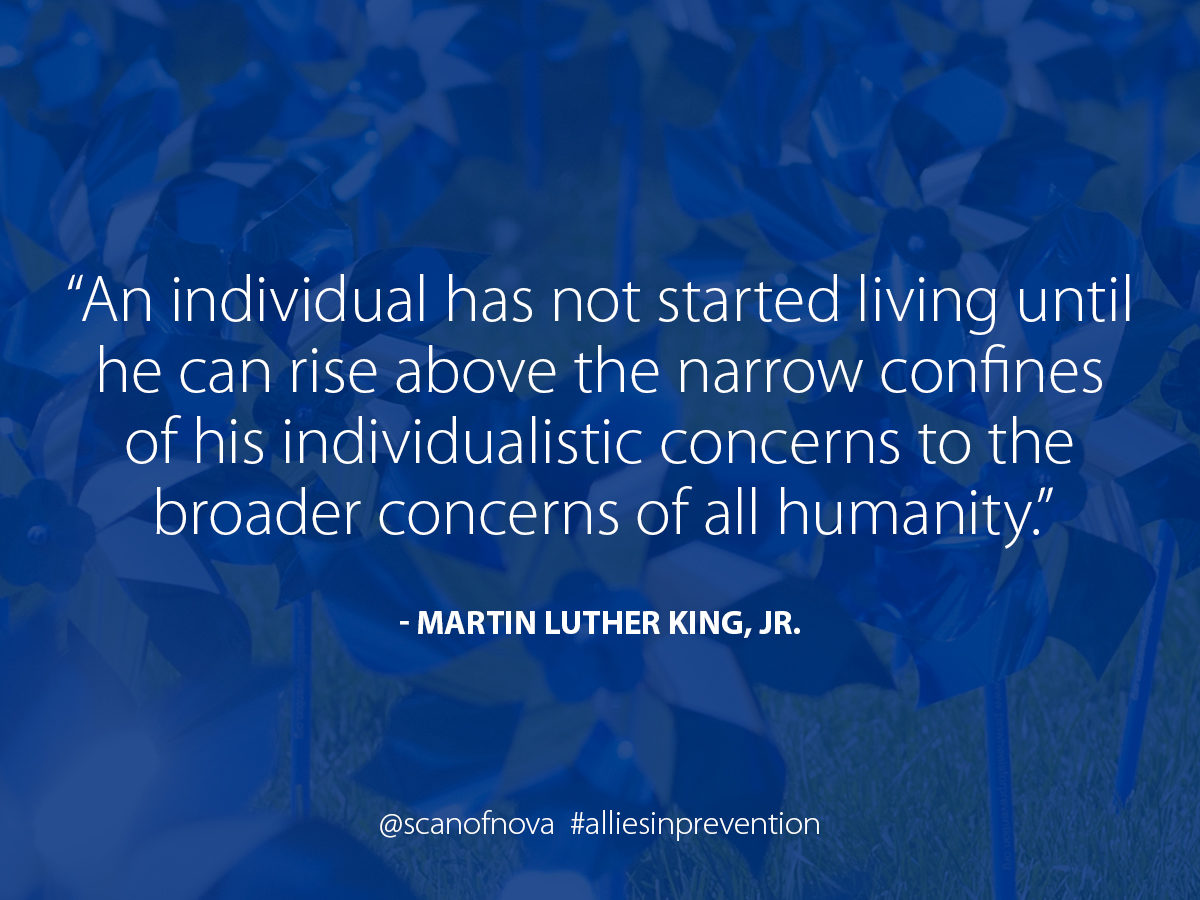 Nominations are now open: please submit a nomination for someone in your community who is “rising above” in their efforts to prevent child abuse, support parents or strengthen families. Who can SCAN’s Allies in Prevention Coalition lift up with this honor? Who can we celebrate as a true leader? Who is someone who sets an example for all of us in the way they protect children and put their community first?

Want to be inspired? You can meet last year’s honorees here. And remember, all nominations are due by February 10, 2017!

5 Stories That Will Inspire You to Build Connections with Children and Families: SCAN Honors 2016 Allies in Prevention Award Winners

On April 5, 2016, SCAN presented the 2016 Allies in Prevention Awards. As National Child Abuse Prevention Month draws to a close, we know we’ll continue to be inspired by these heroes all year long, and we hope you will too! 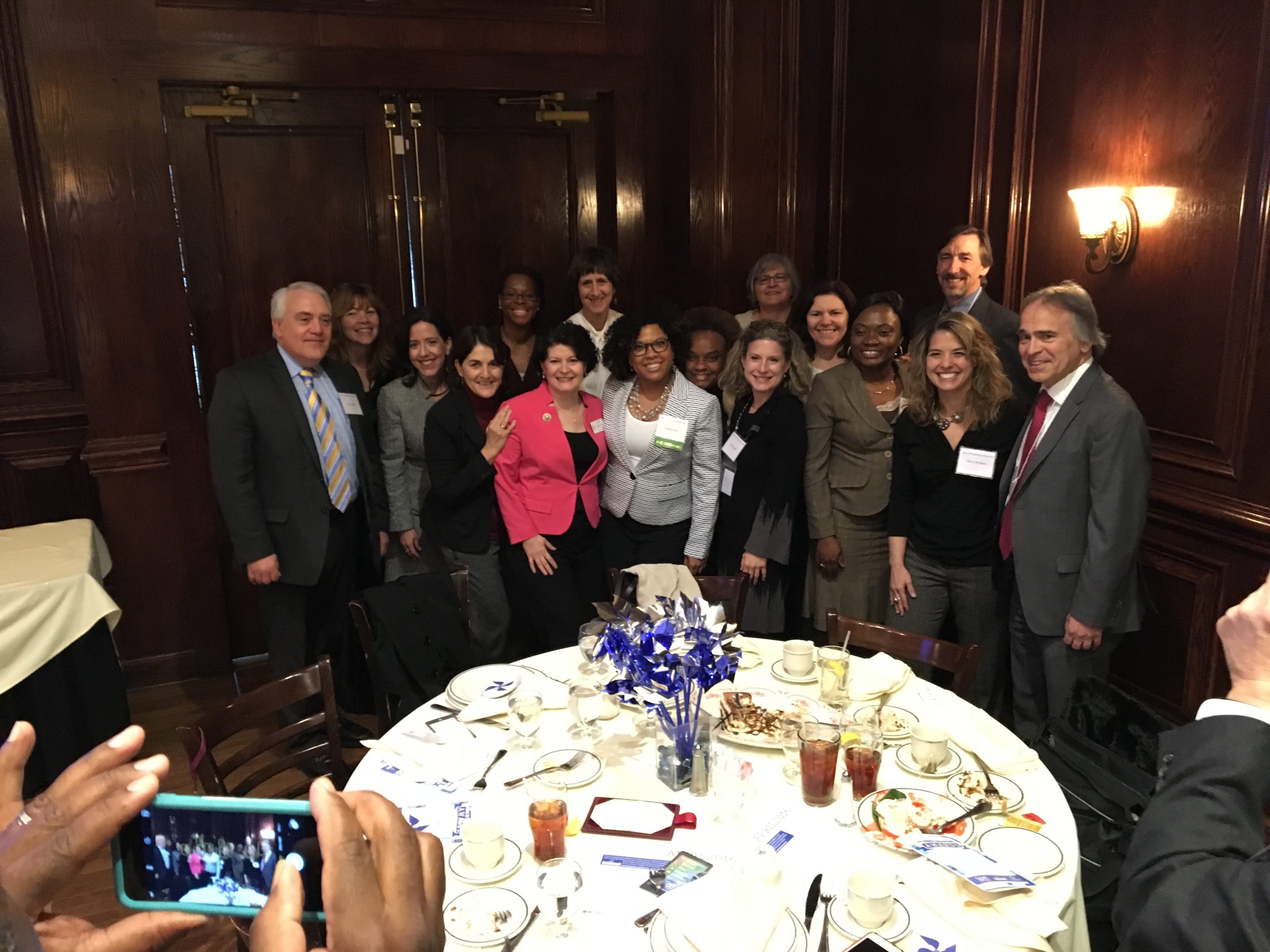 Meet Tabitha Kelly, a mother and child welfare professional who passionately works to build resilience in children and families: “When I am met with a tough decision, I consider how I would act if this were my child; I want nothing less for them than I would want for my own.”

Meet Carlos Castro, who immigrated from El Salvador and then became a father and business owner in the U.S. He now makes the children in his community his responsibility, speaking up and connecting with children and young adults at risk for everything from gang involvement to the basic need for positive adult connections.

Meet Ellen Grunewald, a 25-year veteran of the child welfare profession. Today she looks back on a career spent building connections that have led to the creation of her community’s first child advocacy center and unprecedented cooperation among agencies that will change the lives of children in her community for generations to come.

Meet Burnette Scarboro, a child advocate committed to taking every opportunity to connect with parents in ways that will build up knowledge, confidence and capacity for nurturing connections in their families. Her personal commitment to her own children’s schools blossomed into remarkable child and parent advocacy in Northern Virginia, the greater Commonwealth and beyond.

Meet The Giving Circle, a remarkable group of women in Alexandria who turned an idea to make special donations to child-focused projects in their neighborhood into a half million-dollar, unprecedented investment in the future of their community.

Read more about the 2016 Allies in Prevention Award winners here.

Letter to the Editor: It’s Time We All Became a Part of the Solution

[This Letter to the Editor was first published 4/20/16 in LoudounNow.]

Last week, I spent time with Loudoun County Public School staff providing a Stewards of Children training on how to recognize, react and respond to child sexual abuse. April is Child Abuse Prevention Month, so the timing couldn’t have been better.

But we’ve actually been providing trainings in Loudoun and across Northern Virginia through our partnership with Darkness to Light for three years, and hit the 1,000-people-trained milestone in late 2015. We’ve trained camp counselors and parents, teachers and child care providers, faith groups and rec center staff.

When people—and organizations—come together like this to make children a priority, it is the only way change really happens in a community. Every time we can talk about the reality of child abuse (yes, it occurs in our community), every time we can empower an adult to take action, we have an opportunity to protect more children, prevent more abuse, and strengthen more families.

On April 26, our partnership will host an exciting opportunity in Ashburn. We’ll be screening the TLC documentary “Breaking the Silence” (See Facebook Event here), and facilitating a panel discussion following the film from 6:30 to 9 p.m. at Briar Woods High School. We hope community members will join us to be a part of the discussion; child sexual abuse should not be a taboo subject and it is time we all became part of the solution. Now is your chance.

[This Letter to the Editor first appeared on 4/20 in LoudounNow. Learn more about the event on SCAN’s website here.]

We’re wrapping up the first full week of Child Abuse Prevention Month, a time filled with planting pinwheel gardens to raise awareness, providing prevention trainings with partners in Alexandria and sharing our Kids Need Connections campaign materials with thousands across the region.

But it’s important we pause in our hectic schedules to remember why we do all of this work. Consider these statistics from Prevent Child Abuse Virginia:

Our work focuses on Northern Virginia, and we know that some of the children in these statistics are OUR CHILDREN. They attend our schools, live in our neighborhoods, maybe even have dinner at our tables. They are the reason we do so much this month and all year long to focus on CONNECTION and PREVENTION.

April is an important month at SCAN, but not because we’ve filled our schedule with events and ordered extra pinwheels and have our name in local newspapers. It’s important because it’s a very special opportunity to change those statistics. To change the lives of our community’s children, whom we are all responsible for.

Wondering how you can get involved? Volunteer, plant a pinwheel garden or make a donation on April 22nd during Spring2Action, one incredible day of giving.

Every spring, SCAN celebrates five individuals from each region of Northern Virginia at its annual Allies in Prevention Awards Luncheon. The award winners (there have been more than 60 since the awards began in 2003!) have come from all walks of life — from social workers and foster parents to judges and doctors — and each have made unique efforts to prevent child abuse and strengthen families in their communities and beyond.

This year, five more individuals were selected by a task force of SCAN’s Allies in Prevention Coalition and they are another remarkable group of heroes for children and families:

So many of the people working in child abuse prevention are going above and beyond in their efforts with children, parents and families across Northern Virginia. The Allies in Prevention Awards are one small way we can celebrate and lift up the stories of those making the connections for children that are changing lives. We encourage professionals to stay connected with SCAN by joining our Allies in Prevention Coalition and using our Kids Need Connections campaign in their own communities.